Skip to content
Home
Auto Repair
Overdue Oil Change Symptoms – What Are They? How Do I Know If My Car Needs an Oil Change?

What are the Overdue Oil Change Symptoms that you should always be on the lookout for when it’s time for an oil change? It is often recommended that you change the oil in your engine after a certain length of driving. Some people may suggest oil change intervals of 7,500 to 10,000 miles.

But that is not 100 percent true to change the oil after a certain travel mileage although is the most factor to consider, so what other certain other factors you need to consider before changing motor oil which are:

Change your oil on a regular basis without waiting for these symptoms to appear at a level 2 stage, and always use the built-in dipstick to check the oil level in your vehicle engine.

Level 2 and Level 3 signs are the last warnings for your vehicle engine to change your oil immediately, however, these signs are not guaranteed that your engine is standing in very good health condition.

Signs that it’s time to replace the oil in your car, include a burned smell, black exhaust fumes, irregular loud noises, etc.

So here is the List of Overdue Oil Change Symptoms

Level 1 Stage (At this level engine is at optimal level)

Your automobile will be the first to let you know if there is a problem with your oil. Check the dipstick to see what’s going on since your car’s oil change light will come on if there isn’t enough oil in the system. The check engine light may come on in more serious circumstances. This is your vehicle’s way of alerting you when conditions have grown so severe that the engine might suffer harm from malfunctioning components or a lack of lubrication.

Clean oil is transparent and amber in hue. As it is utilized, it fills up with engine exhaust particles and gets darker. You need to be cautious and check your engine oil at least once a month because it won’t be visible when this starts to happen. To accomplish this, take the dipstick out and clean it before putting it back in the oil tank. Take it out one more now. It’s time for an oil change if the dipstick cannot be seen through the oil.

The exhaust gaseous air from the engine won’t typically be black in color (looking dirty).

As soon as you see a sludge cloud coming from the exhaust, you should change your car’s oil. Keep in mind that oil leaks can also result in dark exhaust emissions, so keep an eye out for those as well!

There are several things that may lead to poor fuel economy, and one of them is dirty or substandard oil. Your fuel efficiency might suffer if the wrong oil is used in your engine.

If your engine’s oil is too old and no longer serves its original purpose, your engine will attempt to use more power (fuel).

One of the most frequent reasons for a tough time starting your vehicle is hard starting oil. Numerous issues might arise from inadequate or dirty oil. Because oil is an engine’s “lifeblood,” when it is low, it may display a number of odd symptoms.

There are many different things that might lead to a difficult start. Check the injectors, carburetors, and other microscopic parts of the fuel system if your car still won’t start after you’ve replaced the oil.

This is frequently the first sign that it’s time for an oil change. When oil levels fall, the friction between moving parts in an engine rises, which can result in extremely loud noises when the car starts or accelerates.

You could have spotted this signal even if your engine’s oil level hasn’t decreased since the oil you’re using isn’t the proper type for your engine. This is because the oil is unable to lubricate the engine parts adequately.

The moving parts of the engine must be kept lubricated by the oil in order for there to be little to no friction while they carry out their different functions.

When the oil is unable to accomplish this—possibly due to age or contamination—the friction between the parts will increase, making shifting challenges. If this is allowed to go on for a long time, it might cause more serious damage.

Level 3 Stage (At this point, the engine may damage 50/100 or require replacement.)

The oil acts as a barrier between engine components, preventing metal-to-metal brushing and preserving engine quietness. The engine noise will rise if your oil isn’t performing as it should. In extreme circumstances, you can even hear banging or rumbling noises, which indicate that your engine is slowly destroying itself due to a lack of oil.

A significant issue that needs to be avoided at all costs is overheating. When the friction between moving parts is too high, an engine overheats.

It’s important to remember this since thinner oils are more prone to “thinning out” at high temperatures. A 5w20 oil, for instance, could thin out in some cities when the temperature is higher than 20oC.

In this case, switching to motor oil with a higher viscosity rating at high temperatures may solve the issue.

Another well-known sign that it’s time to change the oil is a burnt oil odor within the vehicle. Unless your engine’s oil was leaking onto hot surfaces, which happens infrequently, you wouldn’t typically be able to notice such smells.

Other reasons for burning smell due to Rubber seals, plastic valves, and adhesive parts that hold the engine together may also melt, creating odors you wouldn’t ordinarily detect.

When Should You Change Your Engine Oil?

According to top experts:

There are four main “recommended” intervals for oil changes based on factors specific to you and your car:

You can check these expert’s data, however, if you find more in detail on when to change your vehicle oil change then you can check our detail topic in case you need your vehicle to be on a safe side

How Long Does It Take To Do an Oil Change

Long lines are another factor in longer duration.

Can an overdue oil change cause the car not to start?

Yes, it can. When your vehicle run out of oil and seize the motor, it would not start.

Can you drive after the oil change is due?

You can drive for a certain number of miles at level 1, but it would be unfair to specify an exact number because it all relies on the state of your car’s engine, the quality of your car’s oil, how often you travel, and, last but not least, the weather where you drive.

At the level 2 stage, we would recommend changing your oil immediately to prevent any damage to your car engine.

At the level 3 stage, you are too late and most likely that your vehicle’s engine has been damaged to some extent.

An engine that is properly maintained runs smoothly, but when the oil inside gets old and unclean, it can’t lubricate the moving components as effectively and can’t operate as smoothly as it should. This implies that the engine may seem underpowered and that acceleration may be slow. 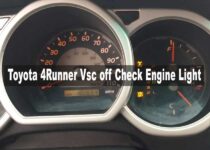