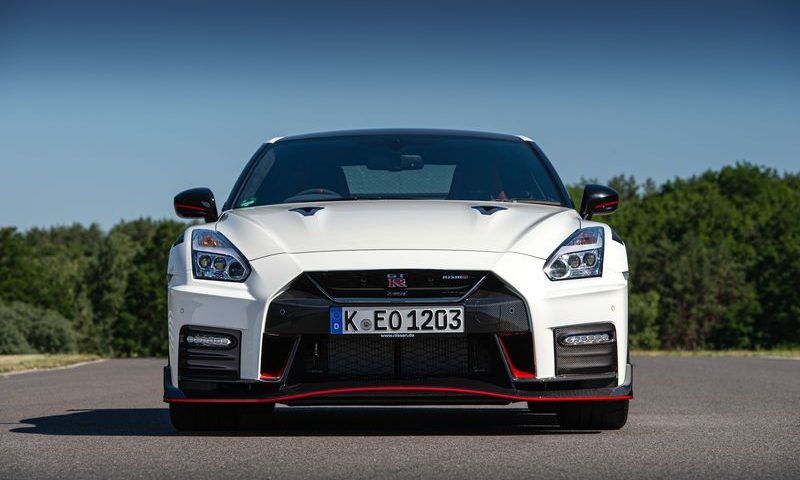 For $145,000, you can buy a Porsche 911 GT3, a 500-horsepower crown jewel of German engineering and the best “streetable” track car Porsche makes today.

An effort of $199,000 will get you a Bentley Continental GT V8, the most handsome athlete in a suit you’ll ever see—and the best all-around car I drove in 2019. 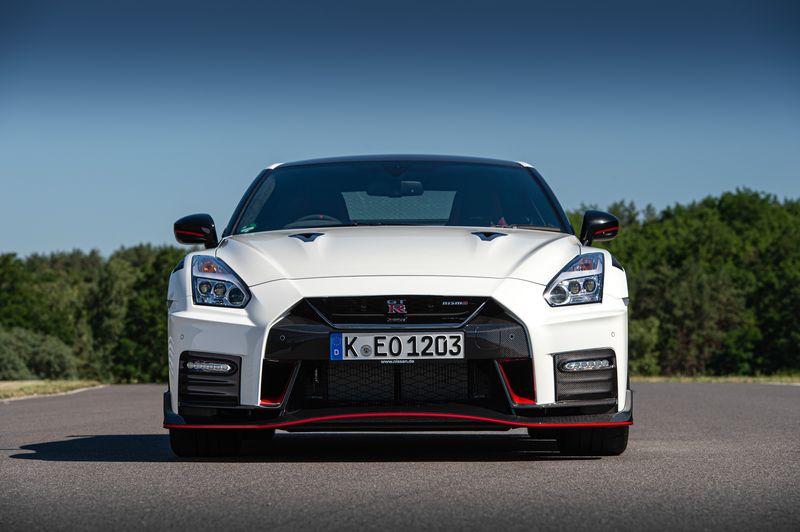 At $203,000, you can own the McLaren 570 GT, the lithe British sprinter that will get to 60 mph in three seconds flat—with the cold calculation of a reptile.

But it requires $210,740 to buy the 2020 Nissan GT-R NISMO Edition, the V6 coupe that is the most extreme iteration of Nissan’s GT-R sports car line. Actually, the one I drove last week in New York cost $212,435, accounting for destination charges and associated fees.

Yes, the NISMO gets 600 horsepower and 481 pound feet of torque. It has a top speed of 198 mph, give or take. (In an unusual turn for a brand promoting a car for its speed, Nissan declined to specify its capacity for speed.) It gets to 60 mph in around three seconds, depending on who’s holding the stopwatch. 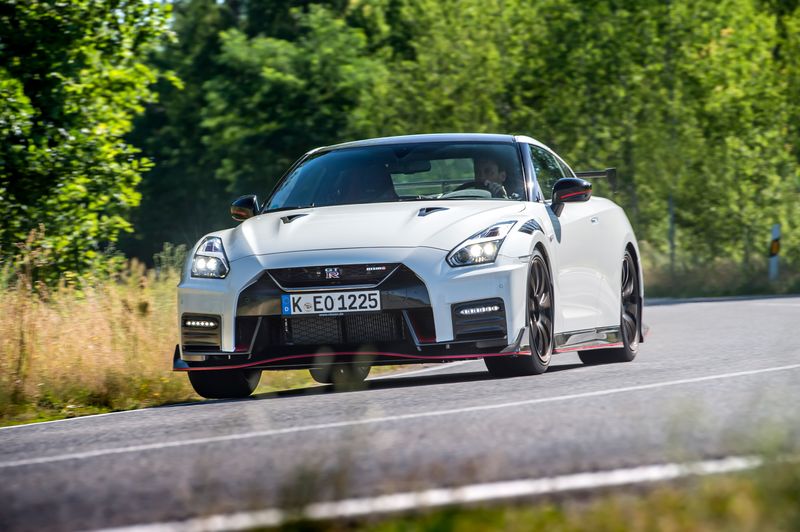 The unique, undulating wave along the bottom lip of the car allows for better egress over steep inclines and speed bumps. Source: Nissan

Those are impressive, though not top-of-the-line numbers; they are roughly comparable with the capabilities of the three I mentioned above. Even the Lamborghini Huracan, with that adrenaline-junky driving personality, starts at $203,000. And that one comes with a sexy Italian design.

Something had to be missing. Why was this Nissan so expensive?

The answer to the first question is easy. Nissan’s GT-R NISMO comes shellacked almost completely with carbon fiber. Its roof, front, and rear spoilers, trunk, and bumpers are carbon fiber. Even the brakes are carbon-ceramic. Carbon fiber, as we know, costs a lot—adding double-digit price premiums to the cars it coats. The NISMO does not actually contain the type of, uh, significant mechanical enhancements meant to make it actually drive more aggressively than even its closest siblings, the $145,540 Nissan GT-R Track and the $123,000 Nissan GT-R 50th Anniversary Edition. That’s if you don’t count such things as standard, rather than optional, carbon ceramic brakes, and if you don’t count some louvers added over the front wheels.

Car marketing departments have worked hard to convince consumers that accoutrements such as carbon fiber and interior stitching unique to a particular variant of car are worth more money. But those cutout vents over the NISMO’s front wheels? Consider me a skeptic on that. They’re kind of like paying more money for jeans with holes in the knee. 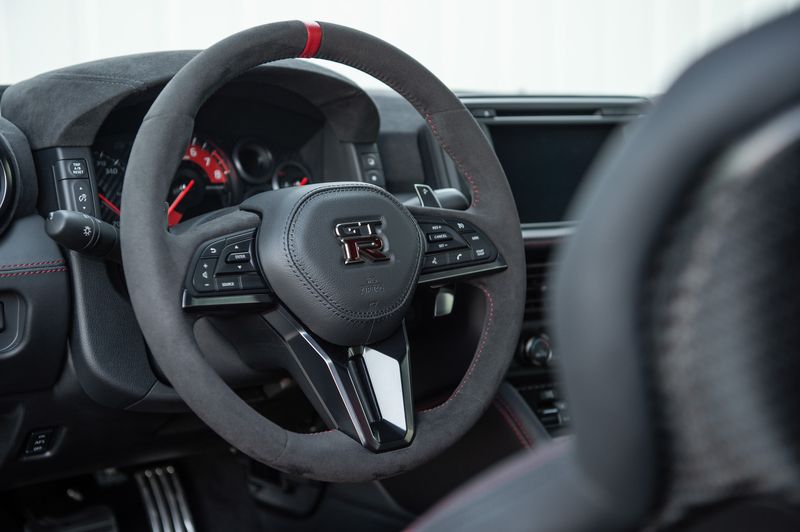 The Nissan GT-R NISMO has an alcantara-covered steering wheel and Recaro sport seats, two of the few highlights in the car’s interior. Source: Nissan

The NISMO’s turbo-charged V6 engine comes paired with a six-speed, dual-clutch transmission, all-wheel drive, and paddle shifters. It drives with last-train-outta-town urgency, with the thinnest of margins separating driver from machine and machine from road. Even rolling out of the garage for the first time, I felt its power in a way I don’t with other sports cars. The whole car feels as if it’s sitting on razor blades, just waiting to be LET LOOSE. It’s like the NISMO bequeaths instant nerve to whomever sits behind the wheel.

The carbon-ceramic brakes are a new-this-year combination of Brembo carbon ceramic rotors (enlarged to 16.1 inches up front and 15.3 at the rear) and Brembo calipers that help improve reaction time, durability, and overall stopping performance. They are perfect: strong, confident, and urgent, but not abrasive. Their response, combined with the feedback from throughout the entire drivetrain vibrating through my back and rear end—coursing from the alcantara steering wheel into my wrists, arms, and shoulders—was immediate and raw, with none of the numbed-down cushioning you can experience in plenty of other, prettier cars.

The unique, warped-looking front lip allows for slightly more ground clearance off driveways and parking lots than many sports cars, an inevitable time- and money-saving design for those who would otherwise forget to go slowly, and at an angle, over even speed-bump-height inclines. The scratch and scrape sound of a front splitter dragging across asphalt or concrete is enough to make anyone temporarily ill. 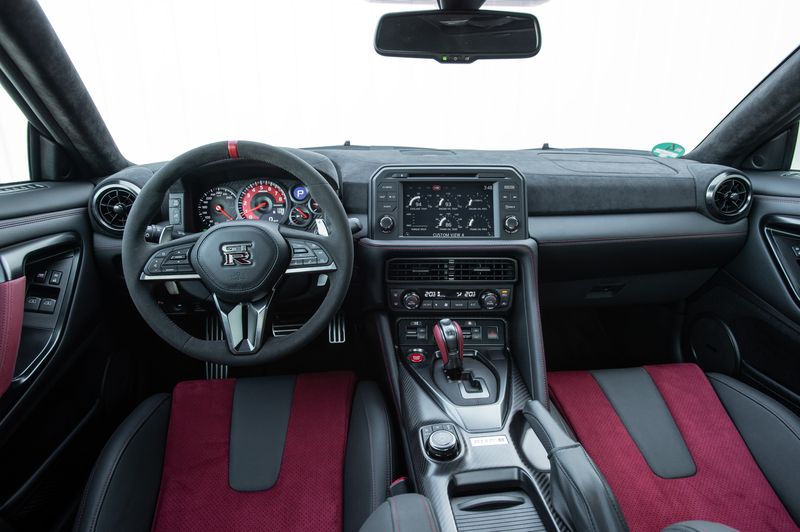 The faux-suede, two-tone trim on the seats comes standard, with no other options for the interior offered. Source: Nissan

In fact, I have zero complaints about how the car drives. The car has well earned its “Godzilla” moniker, fast and precise and powerful and correct, if too quiet a growler for its lethal looks. Keep it out of comfort mode if you possibly can; it’ll feel jarringly stiff over any sort of cobblestone situation. Then again, why would you pay $200,000-plus for a sports car if you don’t drive it in Sport mode?

Now comes the disappointment. The interior of the NISMO is a disaster, nearly as bleak as the 1990s-like interior I saw in the 2020 Lotus Evora this summer. At least that car had a manual transmission and quirky, cool, British good looks.

The worst part is that it seems to contain many of the same components as significantly less expensive Nissan siblings. (Nissan did not respond to a question regarding how deeply it shares components across its product line, though the non-answer is telling.) The knobs and buttons look bloated and feel like cheap plastic; the key fob for the car that I drove was held together by a piece of tape. The red-and-black, fake-suede seats come only in that two-tone configuration, with no exceptions; the headliners, garish stitching, and odd netting that make up the rest of the details feel like afterthoughts tossed absentmindedly into a bin of $1 knick-knacks at the local bargain basement. This is all well and good if you’re spending $12,000 on a Honda. It’s not all right if you’re spending $212,000 on anything. 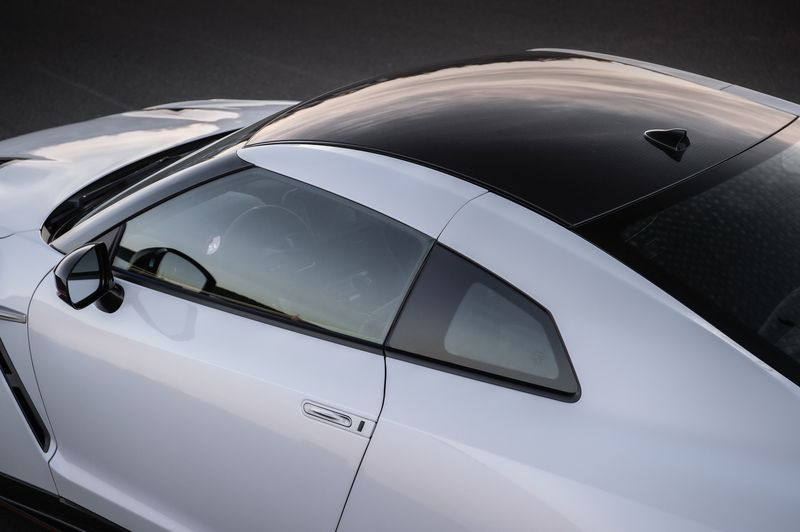 The roof is made from carbon fiber, one of the reasons for the car’s high price tag. Source: Nissan

As for the entertainment-technology apparatus, well, I can report that it works. But it lags behind the status of other luxury vehicles that are $100,000 cheaper: The resolution of the small, eight-inch screen looks outdated; even the simple shape and configuration of the apparatus feel like what we see in cars that cost far less. There’s not even a clear indication about how or when to use the controls on the touchscreen vs. randomly pushing the buttons and round knob set in the center console as you finger through radio stations.

Here’s one highlight: The Recaro seats inside the NISMO were supportive and sturdy, holding my hips and shoulders in a firm grasp as I rounded corners on an autumnal leaf-peeping drive upstate. Yes, it was a beautiful feeling. But will feel far more constricting than beautiful for any drivers who dare to have wider dimensions across their belly, hips and shoulders (i.e, most men).

From any angle, the GT-R NISMO is a forgettable-looking car. It wins marks for restraint, since it foregoes the tacky red lettering splayed across the GT-R announcing its “50th Anniversary” status of the one I drove around New York last month. Even the valets at my neighborhood garage thought that was in bad taste, and those guys love everything. 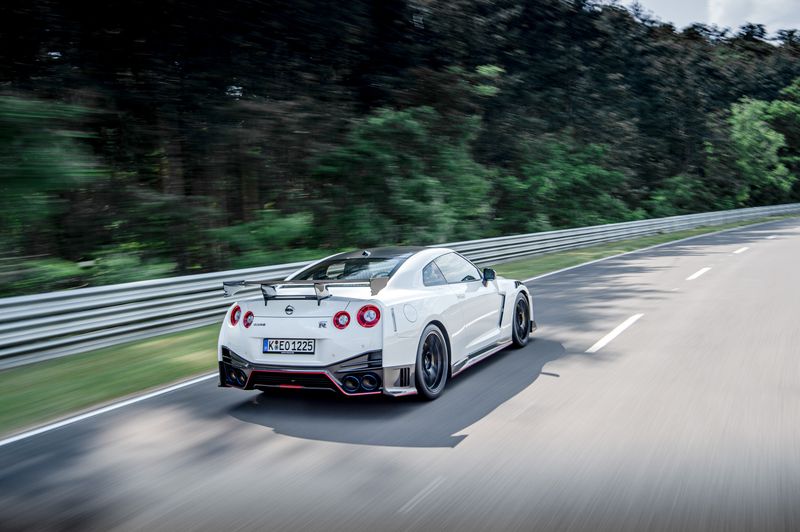 There are multiple variants in the Nissan GT-R line, including “Track,” “Premium,” and “Anniversary” versions. The NISMO is top of that line. Source: Nissan

Its broad sides look like 2×4 planks nailed haphazardly onto a fence; the already awkward roof topline is made worse as it stubs its toe on the abrupt end of its square butt. Worse, the front half is virtually indistinguishable from its Nissan brethren. The gaping, oblong grille is itself nearly as bad as those on the front of the Lexus—and that is the worst insult of all. You know that striking face on the front of a car that puts fear into the hearts of rear view-watching friends and neighbors as you chase them down on the road? This is the opposite of that.

Nissan says new exterior details such as the air vents, spoiler, and front bumper resemble those on the Nissan GT3 GT-R, which helps explain the high price. The comparison will be lost on 95% of people, including most car guys.

A Nissan representative declined to discuss production numbers, though buff book blogs say the company will build 200 NISMO cars, with 65 of them going to buyers in Japan. “GT-R buyers are typically younger for the sports car segment with a higher household income,” he wrote me in an email. “They typically seek performance and handling as a reason for purchase.”

You don’t say. I hear Ford makes a fun sports car. For this kind of money, you could buy three of them.

Nissan won’t make many of them. Estimates say roughly 200 will be made for distribution around the world. Source: Nissan and Bloomberg