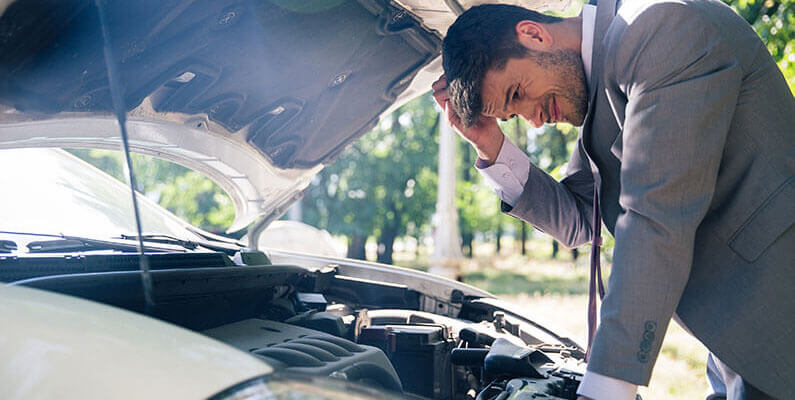 A car makes rattling noise when accelerating only when something went wrong under the hood, there could be a various reasons for car to make noise while accelerating, the most common problems can be diagnosed easily without being called to expert.

How to diagnose a rattling noise at home?

Listen the sound of unusual voice coming from the engine by using a screw, Place one end on your ear and one end on all the pulleys one by one to locate the problem.

All pulleys installed at the left side of the engine.

Most of the time the rattling sound comes only when the level of engine oil becomes too low, therefore the first step is to check your car oil level if it is too low then put back it on at a recommended level without wasting any more time.

If the noise still occurs after filling engine oil then the engine has already been damaged from inside due to low level of oil for a long time cause some parts of the engine ran without engine oil.

This could cause a major overhauling of the engine, Consult immediately from an expert.

However the question still arises why the engine level became too low is another debate which can be read it out from here. How to Fix Car Burning Oil

Not many countries have a good level of fuel quality, therefore a good brands of cars such as Mercedes, BMW, Audi and many others car engines making a noise while accelerating due to low quality of fuel, in that case a person should have to switch to high-octane fuel or use high octane lubricant for these cars to avoid rattling sound.

Build up naturally in intake valves, combustion chambers, injector nozzles and piston of the engine by processing of burning gasoline in gasoline engines, too much deposit can cause the car to make rattling noises when accelerating in addition low fuel efficiency and low speed problems as well.

A variety of products available in the market to clean your car by simply putting into your tank it mix with the fuel and simply clean all the deposit in the engine.

Most of the time belt tensioner was a cause for rattling sound while accelerating a car, a person can diagnose it via screw procedure and replace it to fix this problem, However don’t do that by yourself, an expert only can change it perfectly so keep it in your mind.

Another reason for rattling a sound while accelerating, alternator also called an electric motor as well, so don’t confuse it by the name of alternator. Consult with the expert to fix this.

Exhaust pipe rattling sound may not occurs while acceleration but can noise while at low rpm, it can be fix if you have a proper tools and a hose clamp with bush to absorb shocks while at low rpm.

These are the common and easy to fix noises.